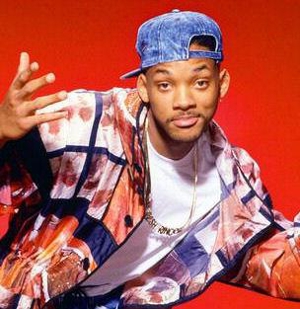 This is what the cool kids are into, right?
Usually, your characters need to wear clothes. If your show is set in modern times (and sometimes if it isn't), you'll dress the characters in appropriate clothes for the time. After all, it would look weird if a modern character wore last decade's styles, right?
Advertisement:

Unfortunately, fashion is highly context-sensitive. There are only a few fashions that have stood the test of time (like T-shirts and jeansnote though the cut and texture of the jeans are subject to trends; not many people can pull off the acid-washed look nowadays, and particularly loose fits have been very rare since the late 2000s, two-piece suitsnote though there too, cut and style have changed drastically: double-breasted suits are far less common, ditto pinstripe suits, lapel width varies massively, and so on, and the Little Black Dress) and even the particulars of those vague templates can fluctuate with the decades—and odds are, your fashions didn't stick around. If a character from a show that supposedly takes place in the 21st century has '80s Hair, he's going to look weird... almost as if he's from the eighties.note Funnily enough, some types of '80s Hair did actually come back in style in the first two decades of the 21st century, especially in the 2010s, to the point of a revival, though probably not in the way eighties sci-fi predicted. The legendary film costume designer Edith Head, well aware of this problem, explained on several occasions that she often didn't design according to the current styles in order to avoid having the clothes look dated when the movie actually came out, preferring to go for a more classic style that would look good over the years.

In other words, fashions that don't just tell you what year the show was made, they scream it loudly enough to deafen your eyes.

Since most costumers aren't psychic, this happens a lot when old shows are rerun. It can also cause Fridge Logic if the show is set in the future. "Wait... why do people in the year 2800 wear clothes from the '70s?" Fashion Dissonance isn't completely restricted to shows set in the future, though — in fact, it can also be obvious if they're set in the time they were made, or even if they're set in the past (see Gorgeous Period Dress for one example of this, but a more specific example is the question of why no one in Higurashi: When They Crynote which takes place in the early 1980s has '80s Hair).

Compare Outdated Outfit, X Called; They Want Their Y Back, I Was Quite a Fashion Victim, No New Fashions in the Future, Hollywood Costuming. Frequently occurs as a result of an Unnecessary Makeover, since the Ugly Duckling is frequently made over from what is considered a "dull and drab" look to a more "trendy and fashionable" one. However due to the high turnover of fashion trends, in a few years time, the "fashionable" look can quickly become dated and tacky, while the original "dull" look can look more simple and timeless.

For those who are immune to fashion dissonance, see Awesome Anachronistic Apparel.

There are many eras with regrettable fashion trends. Here are a few:

open/close all folders
The 1960s

The Sixties are justly famous for mini-skirts, go-go boots, and bright Carnaby Street Mod colors. Hair was big and eye makeup was laid on with a trowel. Shows associated with Sixties fashion:

The 1970s
The Seventies were polyester heavy. Hair was worn thick and often frizzy; men wore bushy mustaches and beards. Trousers were flared, lapels were wide, and there was too much corduroy. Sixties features like beads were still hanging on. And eyeshadow was bright blue, regardless of the wearer's skin tone. Here are some of the examples of shows associated with Seventies fashion:

The 1980s
The Eighties were about neon, power dressing, and Fashionable Asymmetry. The female silhouette had huge, baggy oversized batwing shirts you could smuggle a baby under combined with tight-fitting spandex leggings or frilly skirts; men wore white jeans, t-shirts with huge slogans and black leather jackets, maybe sleeveless, with silk scarves tied into the findings and fingerless gloves. Leotards and sweatbands were day clothes, makeup was dark and loud, earrings were bigger than the ear they were attached to, and everyone had an enormous perm held aloft with ozone-destroying amounts of chemicals For men's formal wear, suits were often double-breasted. Whereas the 6x2 formation (where 6 buttons are on the suit, of which 2 can actually be buttoned up), is still (very ocasionally) worn nowadays, the 6x1 formation, 4x1 formation, and 4x2 formation (with the exception of on blazers) are no longer worn, and look bizarre to modern eyes. Winchester shirts (blue, with white collar and cuffs), wide ties, and large and flashy cufflinks were also common.

Here are some series strongly associated with Eighties Fashion:

The '90s colour palette is also bright, but rich and saturated rather than pastel and neon. The early half of the decade is made of squiggles, scribbles and triangles, or Mediterranean/African patterns, and if you were extremely cool you'd be wearing a thick sweater with that kind of print knitted into the fabric. Hip-hop and grunge influences became mainstream and got immediately garbled. The teen heartthrob uniform was a distinctive floppy center-parted haircut ("curtains"), an oversized checked shirt worn as a jacket, and a skateboard, with a backwards-turned baseball cap if he was really cool. Girls wore bright crop tops, scrunchies (around a high ponytail), butterfly hair clips, a choker (maybe styled to look like a tattoo), brown lipstick, and gelled their bangs so that it fell in exactly seven identical spikes. The later half of the decade saw cartoonish 70s influences like tie-dye t-shirts, flares, sky-high platform boots and blobby flower designs, as well as the appearance of the ubiquitous Friends-derived Rachel haircut.

The 2000s
The beginning of the New Millennium was futurist and optimistic, with bad CGI, bubble imagery, organically-shaped tech with clear cases, and lots of holographic textures and silver. The War on Terror killed this pretty quickly, replacing it with kitschy Americana like flags, cowboy imagery, camo and double-denim. Men wore black flame-print shirts and bleached the tips of their hair or gelled it into a fauxhawk; women wore their hair zigzag-parted and ironed flat, an ultra-short crop top, an ultra-orange fake tan, and ultra-low-rise bootcut jeans to show off their rhinestone-studded thong straps and tribal tramp stamp of a Playboy bunny. The brighter skater, scene, and more gothic emo looks defined teens towards the middle of the decade; both genders got their ears stretched, or wished their parents would let them. Designer stubble was common for men, and in formal wear, skinny lapels on suits and skinny ties were popular. "Smart casual" for men included the now long-defunct trend of wearing an orphaned suit jacket (*not* a blazer) with jeans.

By the end of the decade, with the recession looming, jeans got extremely skinny, shoes degenerated to ballet flats, and women began dressing in smelly old clothing from vintage shops while carrying ukeleles while their boyfriends began growing moustaches and dressing like lumberjack grandfathers in red-framed shades — the emergence of the Hipster trend.

Perhaps the most defining aspect of 2010s would be its drive towards ending gendered clothing. With the exception of the skirt/dress (although there are drives to break down that barrier) the focus is now on unisex clothing that everyone can wear equally. It is now perfectly common to see men and women dressed exactly the same, and an increased focus on comfort over elaborate designs saw a merging of sportswear, leisurewear and streetwear during this time. Hoodies, sweatpants and gym clothes outside of the gym are now the norm. The decade also saw the meteoric rise of skinny jeans, the increased social acceptance of tattoos on women, and the bleaching of hair in Technicolour; the latter arguably thanks to the growth of streamer culture requiring the need to stand out from everyone else on thumbnails.