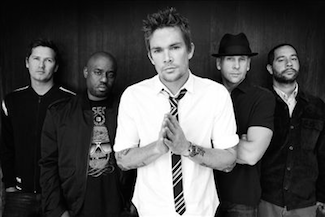 "Every morning there's a halo hangin from the corner of my girlfriend's four post bed,
I know it's not mine but I'll see if I can use it for the weekend or a one-night stand."
— "Every Morning"
Advertisement:

Sugar Ray are a Alternative Metal / Nu Metal turned Pop Rock band who had their biggest success in The '90s, and are mainly famous for, besides a string of fondly-remembered radio staples, making one of the biggest stylistic turnarounds in popular music, after the lite-pop ditty "Fly" became a chart smash.

The band first formed under the name of "Shrinky Dinks", but changed their name to Sugar Ray. They made their name fusing Hip-Hop and Hard Rock, established with their 1995 debut Lemonade And Brownies, produced by DJ Lethal and future director McG. The album never really made much headway, but Atlantic Records gave them a second chance, on the condition that they hire a big-name producer. The band immediately chose David Kahne, after hearing his work with Sublime, and in 1997 they unleashed their more famous second album, Floored. The album further developed their rock stylings, incorporating Punk Rock, Funk and Reggae, and also giving the world the immortal "Fly,"note Which features Reggae artist Super Cat in one version of the song. not only the band's first hit, but a Billboard #1 airplay hit at that. At the time, the song was the definitive Black Sheep Hit, a light, breezy pop number and one of the few breathers on an album full of heavy rock, and so refreshing was the song at the time, it helped the album go double platinum.

Critics and fans immediately predicted the band as a One-Hit Wonder, so responding to claims that their 15 Minutes of Fame were up, the band spitefully named their 1999 album 14:59. The album surprised people by almost completely dropping the heavy sound in favour of a more upbeat, Pop-influenced sound. The move paid off handsomely as the album outsold its predecessor, and spawned the hits "Every Morning," "Someday" and "Falls Apart." Reestablished, the band continued in this vein for their Self-Titled Album (2001) (which had the minor hit "When Its Over") and In The Pursuit Of Leisure (2003), while still maintaining producer David Kahne.

In 2004, lead singer Mark McGrath got a job as an anchor on Extra, and since then, they've only been able to put aside time for a 2005 compilation, The Best Of Sugar Ray, the song "Into Yesterday" for the Surf's Up soundtrack, and one new record, Music For Cougars, in 2009. Meanwhile, Mark, alongside Everclear singer Art Alexakis, were the nucleus for the Summerland Tour, a festival filled with 90s bands that had "at least had a big hit or two" such as Marcy Playground, Gin Blossoms and Lit. The two had Creative Differences, however, and Mark spun off his own 90s revival tour called Under The Sun. In 2010, Mark started hosting Don't Forget the Lyrics! for a couple years.

Turntablist Craig "DJ Homicide" Bullock, bassist Murphy Karges and drummer Stan Frazier have all left the band since Music For Cougars came out, leaving Mark McGrath and guitarist Rodney Sheppard as the lone original members of the band. Unfortunately, this has come with some legal issues.