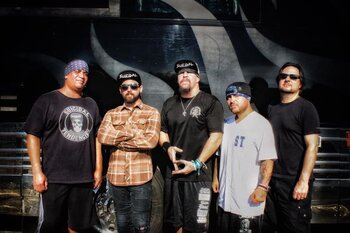 Mike Muir (and the rest)
I'm a suicidal failure
I gotta have some help
Have suicidal tendencies
But I can't kill myself
— "Suicidal Failure"
Advertisement:

Suicidal Tendencies is an American Hardcore Punk band formed in 1981 by vocalist Mike Muir. Although their music video for arguably their most famous song, "Institutionalized", was one of the first hardcore punk music videos aired on MTV, they gained more mainstream exposure by adding thrash metal influences to their sound, leading them to be credited as the inventors of "crossover thrash". Their popularity even further exploded in the early 1990s when adding influence from funk music.

Despite their mainstream popularity, in recent years, the band has stripped away most of the thrash and funk influences and turned back into a hardcore band, primarily due to discomfort within the major spotlight.