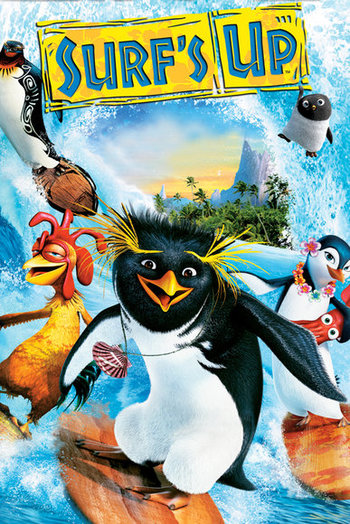 "It's gonna be great... Can I get in line to not see it?"
— Glen Maverick
Advertisement:

Surf's Up is a film by Sony Pictures Animation. It takes on an interesting style: despite being set in a world of anthropomorphic talking animals, the film parodies surfer documentaries, complete with handheld camera shots and interviews with the cast spliced in various places. The plot tells of a young Rockhopper penguin named Cody Maverick, who dreams of moving to the tropics and becoming a legendary surfer, like his idol, Big Z.

A 2007 CGI animated film, and the second one from Sony's animation division. It earned a surprising Academy Award nomination, and was the only film from Sony Pictures Animation to do so until Spider-Man: Into the Spider-Verse over a decade later, which ultimately won the award.

In early 2016, Sony announced that they were partnering with WWE to produce a sequel, entitled Surf's Up 2: WaveMania, that was released Direct to Video on January 17, 2017, 10 years after the original film. The pitch is that Cody accompanies the Hang Five, a group of big wave riders (voiced by John Cena, Triple H, The Undertaker, Paige and Vince McMahon), in their quest for "The Trenches", a legendary surf spot holding the biggest waves in the world.