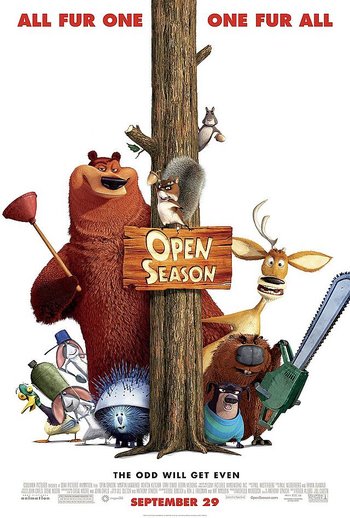 The odds are about to get even.
Advertisement:

Open Season is a 2006 animated comedy produced by Sony Pictures Animation as their first animated feature. In the small town of Timberline, Boog (voiced by Martin Lawrence), a happily domesticated, 900-pound grizzly bear is kept by Ranger Beth (Debra Messing). Boog enjoys being the star of the town's educational nature show and sleeping in Beth's cozy garage. However, Boog's pampered life turns upside down when he meets a scrawny, fast-talking one-antlered mule deer named Elliot (Ashton Kutcher). Through a series of disastrous events, culminating with Elliot inadvertently ruining Boog's show while trying to escape from egomaniac hunter Shaw (Gary Sinise), Beth has Boog (along with Elliot) helicopter-lifted to a far part of the forest. Boog panics, having no idea how to survive in the forest. Elliot promises to lead Boog home. The two are pursued through the woodlands by the vengeful Shaw, who wants revenge on Boog and Elliot for wrecking his truck. While Boog just wants to get home, Elliot just wants to have a friend.

Notable for being the only feature film co-written by David Feiss, who created Cow and Chicken. Received three Direct to Video sequels (two animated by Reel FX Creative Studios, with the fourth, Scared Silly, by Rainmaker Entertainment) that managed to make this light and soft movie even Lighter and Softer.

The films and its sequels contain examples of:

Example of:
Cute as a Bouncing Betty