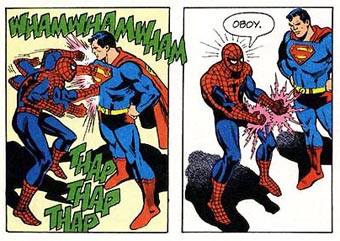 Spidey now understands why they call him "The Man of Steel". The hard way.
"When you hit a man as hard as you can ten times and it only makes him sing like Little Richard, there aren't a whole lot of Plan B's."
— Seanbaby, The 6 Most Amazing Acts Of Mid-Fight Mockery In MMA History

In a fistfight, one participant (frequently The Hero) gets in close to his (usually much-larger and frequently The Brute) opponent, and lands a flurry of punches into his gut.

The opponent just looks down and smiles, completely unharmed, giving the hero a moment of sudden dread, before inflicting some violence upon him in return.

In some cases, this can be the beginning of a Curb-Stomp Battle.

The big guy may also say something like "Is That the Best You Can Do?" or "Stop it, that tickles." Sometimes the same effect is achieved when the target turns out to be Immune to Bullets.

Almost exclusively limited to the comedy-action genre, though it occasionally appears as part of a Professional Wrestling Squash Match, as a particularly cruel form of what wrestling fans call "no-selling."

See also No-Sell, The Worf Barrage, and Explain, Explain... Oh, Crap!. When the flurry of punches actually does work but with a 10 second delay, it becomes You Are Already Dead. When the 'Uh Oh!' becomes Screw This, I'm Outta Here!, you have Attack! Attack... Retreat! Retreat!.

The Trope Maker demonstrates what happens when you insult your opponent before realizing they're too tough to punch out.

The Trope Maker demonstrates what happens when you insult your opponent before realizing they're too tough to punch out.