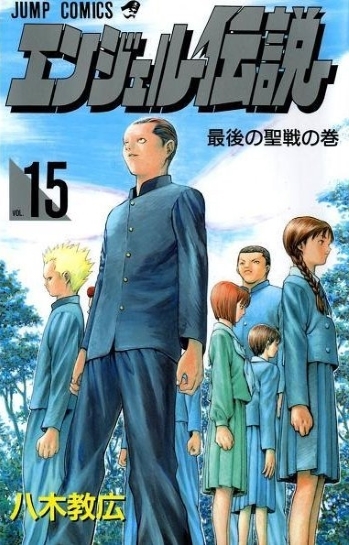 What a bunch of delinquents. Left to right: Takehisa Yuji, Kitano Seiichirou, Shirataki Ikuno, Seikichi Kuroda, Ikuko Hirayama, Koiso Ryoko.
"At the end of this dreamless, hopeless, inhospitable century, there was a boy who possessed a serenely honest and simple heart. But his outward appearance—from his tiny black irises, to his year-round ghost-pale skin and black marks under his eyes, which made him look like a heroin addict...to his nearly non-existent eyebrows, and vicious bed-head that required liberal application of hair gel to keep under control..."
— Opening Narration
Advertisement:

Angel Densetsu (エンジェル伝説 , "Legend of Angel") is a Shōnen manga created by Norihiro Yagi (who subsequently created Claymore). Serialized in Shonen Jump from 1992 to 2000, the story spanned 15 volumes. In 1996 it was adapted into a 45-minute Original Video Animation.

Angel Densetsu is a story about Seiichirou Kitano, a kind and naive boy with the heart of an angel, but the sinister looks of a devil. This leads people to assume that he is a villain or heroin addict when he starts at his new school, thus creating hilarious misunderstandings, including him accidentally and unknowingly wresting the title of head thug, or "guardian" of the school from its previous owner, the boastful and cowardly Kuroda. He wins the respect of another delinquent, Takahisa, and soon has all the delinquents in the school treating him as their boss without even realizing it. Kitano's growing legend prompts many other thugs to challenge him, and he somehow manages to defeat them all with the help of his henchmen, as well as his uncanny talent for avoiding blows and unintentionally bamboozling opponents into defeating themselves.

Kitano remains blissfully unaware of his reputation for practically the entire series, and is frequently confused by the odd behavior of his classmates and teachers around him. Yet even as he remains the same as ever, he ends up changing everyone around him by teaching them to leave behind their prejudices and assumptions. Koiso Ryoko, a martial artist and heir to her father's dojo, is the first to discover that he is nothing like everybody assumes. Over time, Kitano gathers a group of loyal friends who accept him for who he really is.