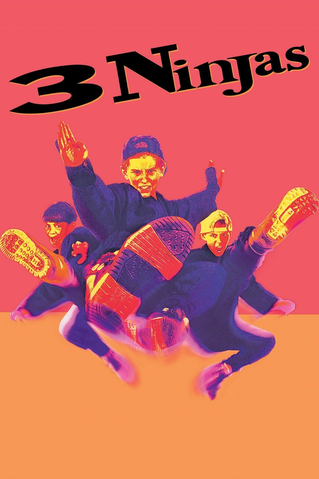 Comin' at you!
Rocky: We should run.
Tum Tum: We should hide.
Colt: We should kick their butts!
—3 Ninjas Kick Back
Advertisement:

The 3 Ninjas series is about three young brothers who are trained to be ninja-like by their grandfather. The original 3 Ninjas is an 1992 martial arts comedy, directed by Jon Turteltaub. It features Mori Tanaka (Victor Wong), a Japanese grandfather who teaches his American grandsons martial arts. Three of the four films were produced by Shin Sang-ok (as Simon S. Sheen), most known for directing Pulgasari. Yes, it's that guy!

Said grandsons are promptly introduced and receive proper codenames. Samuel Douglas Jr. (Michael Treanor), is physically strong, tough, and remains strong and cool under pressure. His codename is "Rocky". Jeffrey Douglas (Max Elliott Slade) is fast and free, "with the spirit of a young wild horse", receiving the codename of "Colt". Michael Douglas (Chad Power) is a Big Eater. His codename is "Tum Tum". The trio must help their grandfather against a rogue student of his, who has turned career criminal: the dangerous Hugo Snyder (Rand Kingsley).

The film involves the boys facing Snyder and his agents, along with having a rivalry with some school bullies, and Rocky's relationship with his first love interest Emily (Kate Sargeant).

It was a modest box office hit: earning $29,000,301 in the United States market. The film was lucrative enough to receive sequels. Two were produced almost immediately. However, they were curiously released in reverse order. What was to be the intended third film was released second, the second film was released third, causing some internal logic problems.

The second film to be released was 3 Ninjas Kick Back (1994). Grandpa Mori plans to visit Japan to return a dagger he has held for 50 years, apparently to serve as a prize in a martial arts tournament. He takes his grandsons with him for what he hopes to be a bonding experience. The boys have grown up somewhat and their different interests have made them drift apart. Rocky is having trouble concentrating on anything other than cute girls, his latest crush being Lisa Di Marino (Maital Sabban). Colt has developed a Hair-Trigger Temper and can be counted to pick up fights left and right. Tum-Tum has become even more obsessed with food. They barely have anything in common anymore. When they discover someone has sent thugs to retrieve the knife and that their grandfather has had a very suspicious accident, they travel to Japan on their own to investigate. There they team-up with a female martial artist, Miyo (Caroline Junko King). She might be young but is even better-trained than them. She even agrees to give them some lessons, in exchange for them tutoring her in baseball. Naturally, amorous Rocky has forgotten all about Lisa, shifting his attention to Miyo. The film was not as financially successful as its predecessor, and critics dismissed the film. However, it earned $11,798,854 in the United States market, the 104th most successful film of its year. It did very well in the VHS market, particularly among younger viewers.

The third film is 3 Ninjas Knuckle Up (1995). This time Colt gets a love interest in Jo (Crystle Lightning), a Native American girl whose village comes under threat of becoming a toxic waste dump, due to a Corrupt Corporate Executive. Continuing the decline of the series' commercial value, the third film earned just $413,479 at the box office.

A fourth film was released, featuring a new cast of actors in the roles of the Douglas Brothers. 3 Ninjas: High Noon at Mega Mountain (1998). The film starts with the trio failing at a training exercise. Rocky and Colt grew disillusioned with the regimen and thinking they are too old for it. Rocky would rather spend time with his current girlfriend Jennifer (Lindsay Felton) than spending time with grandpa. Soon, the trio team-up with their new friend, computer nerd Amanda Morgan-Greene (Chelsea Earlywine) in order to diffuse a difficult situation. Retiring Action Hero Dave Dragon (Hulk Hogan) becomes the hostage of a group of kidnappers, led by mastermind Medusa (Loni Anderson), along with any other people placed in danger due to her plans. By the end of the film the victorious trio are back to training, with a new appreciation for it, with Amanda joining them as the fourth ninja of the group. The fourth film was a massive flop, earning only $375,805 at the box office.