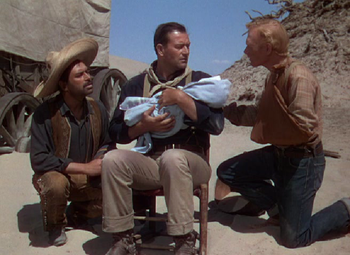 3 Godfathers is a 1948 Western film directed by John Ford and featuring Ford's favorite leading man, John Wayne. It is the best-known of several screen adaptations of Peter B. Kyne's 1913 novella The Three Godfathers.

Wayne is Robert Hightower, the most genial, affable bank robber you'll ever meet. He and his partners, the similarly affable Pedro Roca Fuerte (Pedro Armendáriz) and the much younger William Kearney (Harry Carey Jr.), ride into the Arizona Territory town of Welcome with the intent of robbing the bank. They pull off the robbery successfully, but find themselves pursued by Sheriff Buck Sweet (Ward Bond), who wings William in the shoulder as the desperadoes flee town.

The three bank robbers set off into the desert. They are unpleasantly surprised to find that Sweet shot a hole in their water flask as they were riding away. They are even more unpleasantly surprised when they make it to a water tower built for travelers in the desert, only to find that Sweet has cleverly stationed men there to guard it. Robert, Pedro, and William soon grow desperate as they stagger through the desert. They find another watering hole, only to find that it is also dry—and that there's a woman there in a pioneer wagon. A woman who is nine months pregnant and about to give birth. A woman who just happens to be Sheriff Sweet's niece.

Oh, and it's Christmas Eve.

Shares its source material with Tokyo Godfathers, which places the story in then-modern Tokyo. The main premise also served as an inspiration for movies such as Three Men and a Baby and the first Ice Age film.