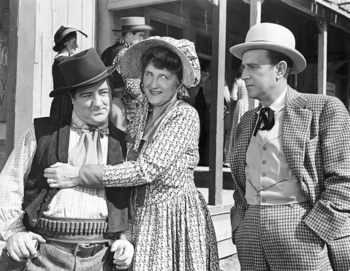 "Montana — in the days when men were men... with two exceptions"
— Opening title card

It opens with traveling salesmen Duke (Abbott) and Chester (Costello) arriving in the distinctly dangerous town of Wagon Gap, Montana. Chester is mistaken for the murderer of a local man and is slated to be hanged, until someone remembers a local law that lets him off the hook... provided he agrees to look after the dead man's widow and her children. Duke and Chester end up with the widow (Main) and her gang of ungrateful and troublesome kids, with the man-hungry widow trying to land Chester as her next husband.

Chester finally puts his situation to good use by becoming the new sheriff, threatening everyone he meets into compliance by displaying a picture of the widow. However, when local outlaws learn about a railroad that's about to buy the widow's property, Chester's defense almost becomes his death warrant!