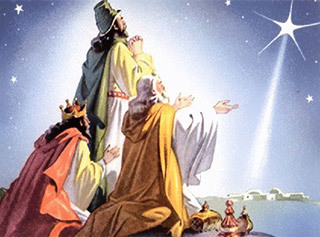 "Guys, I think we should go to that town..."
We three kings of Orient are,
Bearing gifts we traverse afar.
Field and fountain,
Moor and mountain,
Following yonder star...
"We Three Kings", traditional Christmas song
Advertisement:

In Christian tradition the Magi (Greek: μάγοι magoi), Three Wise Men, Three Kings or Kings from the East are said to have visited Jesus after his birth, bearing gifts. They are mentioned only in the Gospel of Matthew, which says that they came "from the east to Jerusalem" to worship the Christ, "born King of the Jews". Because three gifts were recorded, there are traditionally said to have been three Magi, though Matthew does not specify their number.

According to Matthew, the Magi followed a star which came to be known as the Star of Bethlehem. As they approached Jerusalem, King Herod tried to trick them into revealing where Jesus was, so that he might be put to death. Upon finding Jesus, they gave him three symbolic gifts: gold, frankincense and myrrh — precious gold as a gift for a king; frankincense, burned during religious ceremonies, as a gift for a deity; and myrrh, an embalming oil, as a symbol of His eventual death. The tradition of gift-giving for Christians dates back to this story. In many countries, they're the equivalent of Santa Claus. Furthermore, they have dreams from God warning them of Herod's murderous true intentions for Jesus and return home by a different route to ensure they tell him nothing. Unfortunately, this inadvertently leads to Herod committing the Massacre of the Innocents in Bethlehem to attempt to remove this threat to his throne. (Of course, Jesus and his family manage to escape in time; Nice Job Breaking It, Herod!.)

The Eastern church gives a variety of different names for the kings. In the West, the kings are traditionally named Caspar, Melchior and Balthasar, but the New Testament never explicitly identifies any of the Magi by name, nor, for that matter, does it say that there were specifically three, only that Jesus and his family received three different types of gifts. Another interpretation that became common starting with the Middle Ages is to depict each of the three Magi as belonging to a distinct racial group, or at least as hailing from a different continent — typically one is African, one European and one Asian, although which is which varies between traditions — and as being a different age — one elderly, one middle-aged and one young. The idea behind these triads is to metaphorically represent the entirety of humanity coming to worship Christ.

This has no relation to The Three Wise Monkeys, nor to the film Three Kings.

Appearances of the Magi in Fiction: