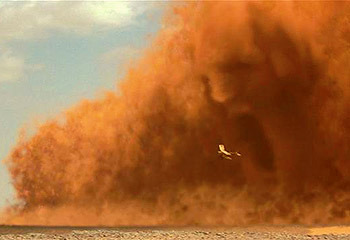 Swallowed by a sandstorm takes on new meaning.
"On the 14th day of April of 1935,
There struck the worst of dust storms that ever filled the sky.
You could see that dust storm comin', the cloud looked deathlike black,
And through our mighty nation, it left a dreadful track."
— Woody Guthrie, "The Great Dust Storm", Dust Bowl Ballads
Advertisement:

A lot of dust or sand being kicked up by the wind. Not such a big deal, right? Wrong. These can cause significant problems for the area they hit. Visibility can be reduced to nearly nothing, the winds can cause significant damage, and it will get everywhere. In contrast to the usual storm, which though it can cause damage also brings needed rain, dust storms are rarely if ever shown to be positive. If anything, they are often used as a sign of tough times, or part of a Crapsack World.

Dust storms are often shown as hardships that farmers have to deal with or as an indication of a drought, since rain tends to pack loose soil down so it doesn't get blown about so much. Dust is finer than sand and so while it doesn't hurt quite as much to be buffeted by it (though it's still painful), it tends to get into more places, leading to an Extremely Dusty Home, and can linger in the air after the winds have settled. Those with asthma or other respiratory ailments should take care during one of these.

Sand storms are often associated with the Sahara, the Arabian Peninsula and settings inspired by them. If you are Crossing the Desert or traveling through Shifting Sand Land, chances are that you will be hit with one of these at one point, especially if it is a Thirsty Desert. Sand traveling at high speed is also painful, the hot winds also making dehydration even worse.

A subtrope of Hostile Weather. May be part of A Storm Is Coming. Not to be confused with Swirling Dust, which is when a Battle Aura stirs it up. Very much Truth in Television, as real life dust/sand storms are in fact very dangerous.