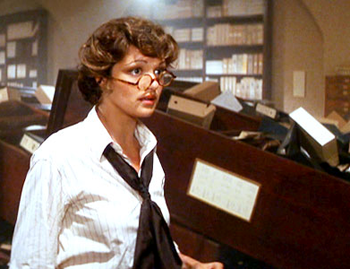 It was like that when I got here.
Dr. Bey: [stutters in disbelief] Oh, look at this! Sons of the pharaohs! Give me frogs, flies, locusts! Anything but you! Compared to you the other plagues were a joy!
Evelyn: I am so very sorry. It was an accident!
Dr. Bey: My darling girl, when Ramses destroyed Syria, that was an accident. You are a catastrophe!
— The Mummy
Advertisement:

In the library or archive, there are always stacks upon stacks of books, and so many bookcases in so many rows. The fight begins, and a bookcase falls... into its neighbor, which falls onto its neighbor, and causes a chain reaction that levels the whole library.

Note: This is not possible in Real Life, as bookcases are both designed to be very stable, and when loaded with books, are very heavy. Not to mention, most library bookcases are anchored.