Recap / Doctor Who S30 E8 "Silence in the Library" 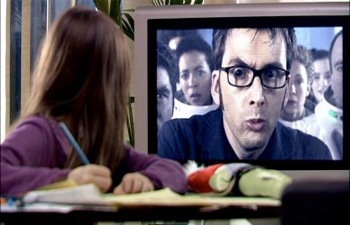 Wouldn't be the first time the Doctor broke that wall...
"Daleks — aim for the eyestalk. Sontarans — back of the neck. Vashta Nerada... run. Just run."
— The Doctor
Advertisement:

The one with Monty Python's Big Red Book, the first appearance of "Spoilers", and the one where hiding behind the sofa stops being an effective deterrent.

Moffat wrote the story after being promoted to head writer of Doctor Who from series 5 onwards. An early version of the Library itself was introduced by Moffat in his 1996 short story "Continuity Errors", the first Doctor Who story he ever wrote.

True to Moffat form, the episodes were nominated for a Hugo award, but they lost out to a certain sing-along blog.

"Silence in the Library" was broadcast with a special warning to parents: don't let your kids watch it late at night.

Somewhere in a very ordinary house, a little girl has schizophrenic visions of a library: huge and beautiful and — best of all — just for her. That is, until the Doctor and Donna show up. The little girl's father and her therapist (Dr. Moon) try to make sense of it all.

The Doctor's psychic paper has brought him to the biggest library in the universe, the size of a planet, and it's unsettlingly empty. Also, there's a little -x- kiss in the psychic message. But bio-scans claim that the Library is not actually empty at all, so where is everyone? And where's the little girl? And why is a robot with a human face telling them to count the shadows?

The Doctor spots a security camera and uses his sonic screwdriver to scan it. The little girl screams in agony at the sound. The Doctor realises that the camera is sentient, and he and the girl have a rudimentary conversation through its display. Both are quite confused at this.

A team of 52nd century archaeologists show up, one of whom, Professor River Song, knows the Doctor very well. Though what kind of connection they have is not revealed... yet. She greets him with a loving "Hello, sweetie!", then appears a bit miffed when he doesn't return the sentiment. River is mysterious, but definitely not a Mysterious Waif: she's mature, snarky and able to take care of herself.

The little girl has watched much of that on her TV, even briefly talking with River and the Doctor through her screen.

River pulls the Doctor aside to catch up and compare diaries, to see how their personal timelines are at the moment. The Doctor just stares at her blankly. Actually, David Tennant just stares at her blankly, because Steven Moffat refused to tell him what was going on. River is appropriately horrified when she realises that the Doctor has never met her. To him, this is their very first meeting. To her, he looks too young, too inexperienced, too happy. He's not her Doctor yet. She also realises that, due to their timelines, the first time the Doctor meets her will be the last time she meets him.invoked

No time to dwell on that, though, as the Library is infested with flesh-eating shadows: Vashta Nerada. They're not every shadow... but they could be any shadow. They live on any planet that provides meat. Yes, including Earth.

River Song turns out to have a sonic screwdriver, much to the Doctor's surprise.

River finds out who Donna is, and gives her a look of utmost pity. Donna's future doesn't look too happy. But River knows that she shouldn't spoil the ending.

The shadows kill one of the party, Miss Evangelista, stripping her flesh and leaving only a skeleton. The sound system in her protective suit is linked to her neural pathways and echoes her voice long after she's died, which is appropriately terrifying. Another is killed, with the Vashta Nerada animating his suit and chasing everyone else through the blacked-out hallways.

Dr. Moon asks the little girl's dad if he can talk to her alone for a moment. Because he needs to tell her something very important:

Dr. Moon: The real world is a lie, and your nightmares are real.

The Doctor tries to send Donna back to the TARDIS, using the teleporter in the Library's little shop. But she is yanked out of existence — screaming and mid-teleport — to take her place among the Library's robot servants with real people's faces.

The Doctor then gets a better look at River's screwdriver, and discovers it looks an awful lot like his own. Then he realizes that the TARDIS didn't signal him that someone teleported aboard, and when attempting to find Donna discovers that she's become one of the robots with human faces, to his horror, as the shadows close in...

Alternative Title(s): Doctor Who NSS 4 E 8 Silence In The Library