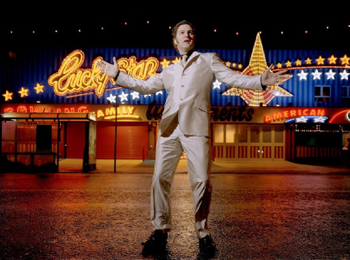 A murder is committed in a Blackpool games arcade, and the resulting investigation will tear apart the lives of everyone involved — Ripley Holden (David Morrissey), the bullying, luck-obsessed arcade owner; his shy, insecure trophy wife Natalie (Sarah Parish); the manipulative but charming and sweet-natured investigating detective Peter Carlisle (David Tennant), and Ripley and Natalie's children, the self-destructive and awkward Danny (Thomas Morrison) and spoilt daddy's girl Shyanne (Georgia Taylor). Ripley finds his life gradually self-destructing under the pressure of the investigation, his failing plans to transform Blackpool into a Las Vegas-style gambling mecca, and his daughter's fiance, an old face from his past whose renewed presence in his life awakens long-forgotten demons, whilst his nemesis Carlisle, who has taken an instant dislike to Ripley, finds his plans to secure Ripley's guilt in the murder scuttled when he finds himself falling desperately in love with Natalie.

Sound like an average crime drama? Think again. Not only does Blackpool contain more than a little bit of dark humour and Character Development and complexity, but it's also a Musical; the characters will often spontaneously break into surreal song and dance routines, singing along to the (actual) pop songs that form the soundtrack of the series and reflect the feelings of the characters and events that are occurring on screen; for example, a drug dealer is arrested in a dance routine choreographed to 'The Boy With The Thorn In His Side' by The Smiths.

Hugh Jackman made an American version in 2007 called Viva Laughlin that was canceled after two episodes.