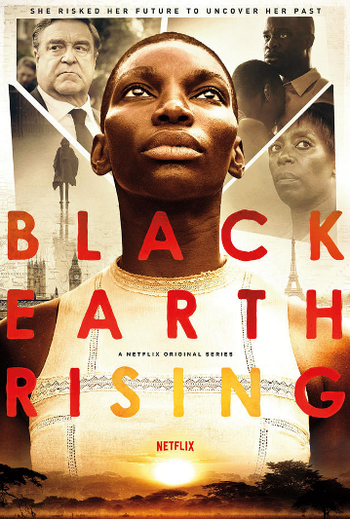 Black Earth Rising is a 2018 British drama/Conspiracy Thriller television series written and directed by Hugo Blick. It airs on BBC Two for British viewers and it airs overseas through Netflix with the first episode released on September 10, 2018. It stars Michaela Coel, John Goodman, Harriet Walter, Noma Dumezweni and Tamara Tunie.

Taking place in both Europe and Africa, it centers on Kate Ashby, a British-Rwandan woman who was rescued from the aftermath of the Rwandan Civil War by Eve Ashby, a British barrister. When Eve landed a case that involved the arrest of a Rwandan military officer turned mercenary and supposed war criminal Simon Nyamoya was apprehended and extradicted to Dutch soil, this brings up bad memories for Kate.

Kate is conflicted with the case because Simon was involved in ending the Rwandan genocide, which clashes with Eve's case because he used child soldiers in his forces when he fought against Hutu extremists. While doing a case in the ICC, an assassin disguised as a National Police Corp motorbike officers takes out Eve, her assistant and Simon in the streets of the Hague.