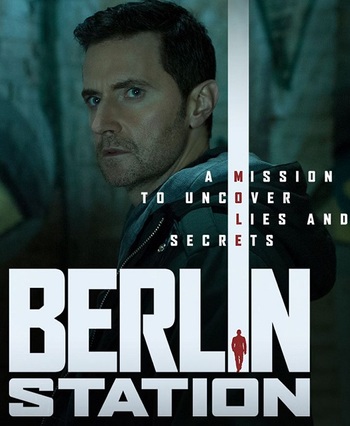 The truth is out there in Berlin.
Advertisement:

The first season has Daniel Miller as a Central Intelligence Agency analyst in Virginia when he was called in to be stationed in Berlin, Germany after being in the field in Panama for a special assignment. He's ordered to investigate two things after he arrived in Germany: Find out who is Thomas Shaw and what kind of beef he has against the CIA since the agency has been suffering from bad publicity when leaks have resulted in arrests and forced retirement of agency employees.

Meanwhile, the CIA is investigating rumors of a Georgian terrorist who has been living in Germany after he was reformed from his Islamist extremist days. They suspect that something big is going on in Berlin.

The second season starts with Miller returning back to Germany on an undercover assignment while the CIA is checking out a politician who's suspected of using ties with right-wing extremists as part of winning the federal elections.

The third season has CIA agents in Berlin investigating a conspiracy with Russian ultranationalists taking advantage of potential tensions with Estionian-Russians in order to eventually launch a raid and occupy Estonia, taking a place from Ukraine.

The series has ended after the third season.