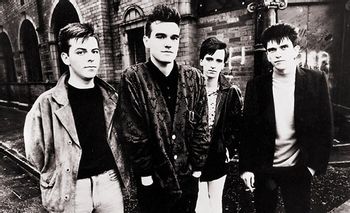 The Smiths in 1986. From left to right: Andy Rourke, Morrissey, Johnny Marr, Mike Joyce.
"So, I broke into the palace
With a sponge and a rusty spanner
She said: 'Eh, I know you, and you cannot sing.'
I said: 'That's nothing - you should hear me play piano.'"
— "The Queen is Dead"
Advertisement:

The Smiths were a Manchester-based alternative rock band that formed in 1982 and broke up in 1987. Based on the songwriting partnership of Morrissey (vocals) and Johnny Marr (guitar), the band also included Andy Rourke (bass) and Mike Joyce (drums). Their sound was largely defined by the combination of Morrissey's witty, Deadpan Snarker lyrics and Campy, Melodramatic vocals, Marr's jangly, catchy pop-rock melodies (drawing a lot from The Beatles, Power Pop and classic rock) and the steady support of the Rourke-Joyce rhythm section, but they've branched out beyond pop-rock and experimented over the course of their career.

Widely regarded as one of the most important bands to emerge from the British indie music scene of The '80s, the Smiths had a major influence on other artists, including Radiohead, The Stone Roses, and Suede. The band's influence on British alternative and indie rock is often compared to the influence R.E.M. had on American alternative rock.

After the break up, Morrissey went on to have a successful solo career. Johnny formed Electronic with Joy Division/New Order guitarist Bernard Sumner, and also formed the short-lived Johnny Marr & the Healers. He also played with cult alternative rockers The The, contributed to Talking Heads' final studio album, Naked and has done session work for too many artists to list. He was a member of the American indie rock band Modest Mouse from 2005 to 2008. After leaving Modest Mouse, he joined the British indie band The Cribs which he was a member of from 2008 to 2011, before setting off on a solo career of his own.

Their numerous non-album singles and b-sides are collected on: