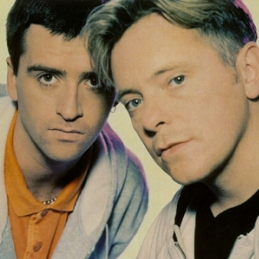 Johnny Marr and Bernard Sumner
"However I look, it's clear to see,
That I love you more than you love me"
—"Getting Away with It"
Advertisement:

Electronic was a British Alternative Dance supergroup formed by Joy Division & New Order's Bernard Sumner and The Smiths' Johnny Marr, active from 1988-2001. The duo also collaborated with Pet Shop Boys and Kraftwerk's Karl Bartos. While treated as an independent entity, in practice they were more of a side-project for Sumner, with him and Marr mainly being active during pauses in New Order's activity (specifically between Technique & Republic and between Republic & Get Ready); in fact, "Gangster" was repurposed from an aborted solo album that Sumner envisioned in the mid-80's. Despite this, Electronic are still fondly remembered as a 90's alternative dance great, maintaining a cult following among fans of Bernard and Johnny's previous bands.

The band had several Eurodance hits in The '90s including "Getting Away With It", "Get the Message" and "Disappointed" before the pair quietly returned to separate projects after their third album. Though they never formally broke up, Marr thinks the band "reached a natural conclusion" and is glad it ended on a positive note, and they occasionally play together live when their respective projects cross.

Not to be confused with Electronic Music on the whole.