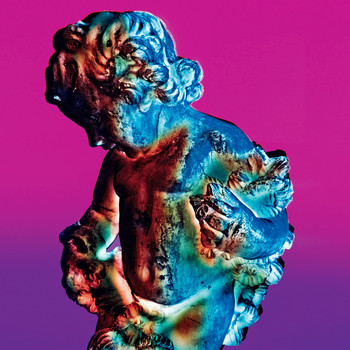 "You know, I've met a lot of cool chicks, but I've never met a girl with all her teeth."
Advertisement:

Technique is the fifth studio album by English Alternative Dance group New Order, released in 1989. The album is an even more radical departure from New Order's signature sound compared to Brotherhood, incorporating heavy use of Balearic beat and acid house influences (inspired by the band's experiences during initial recording sessions in Ibiza) and overall bringing New Order into the Madchester dance scene full-force. Consequently, it also cemented New Order's image as an electronic band, following Brotherhood's conceptual war between the guitar and synthesizer sides of their music. Despite this, a number of guitar-driven tracks still feature on Technique, with songs like "All the Way", "Love Less", and "Run" showing that the band hadn't completely abandoned their rock roots.

Three singles were released off of Technique: "Fine Time", "Round & Round", and "Run 2". The 12" release of "Round & Round" is an extended remix of the song, while "Run 2" is a rearranged version of the album track "Run" featuring sparser production and an altered guitar part. The latter received a music video directed by photographer Robert Frank. Notably, New Order ended up in a bit of legal hot water over "Run" and "Run 2"; the publishing company of John Denver filed a lawsuit in 1991 arguing that the guitar part in the tracks were plagiarized from the Denver-penned song "Leaving on a Jet Plane". Factory promptly deleted the single after charges were filed, New Order ended up settling out of court, and later reissues of Technique and other compilations containing "Run" and/or "Run 2" consequently add in a writing credit for Denver. On a more trivial note, this album was the first of New Order's to make use of the increasingly popular CD single format during promotion; while the band had previously made use of the format for "Touched by the Hand of God" and a US promotional release of "True Faith" in 1987, this marked the first time they did so to promote a proper studio album, and marked the point where they fully embraced the CD single, using it for both "Fine Time" and "Round & Round" ("Run 2" was deleted before Factory could even think about giving it a release on the format, relegating it to just the initial batch of 7" and 12" copies). That said, they still made considerable use of the 7" and 12" formats while promoting Technique, and would continue to do so in conjunction with CD single releases up to the promotional campaign for their most recent album, 2015's Music Complete (with their use of 12" singles extending even further via 2020's "Be a Rebel").

Technique was New Order's last album to be released through Factory Records, with whom the band had worked since their days as Joy Division in 1979; the record label would declare bankruptcy in 1992, following financial hardships caused by both labelmates Happy Mondays blowing all of Factory's money during the chaotic recording of Yes Please! and New Order themselves taking far too long to complete their follow-up to Technique, Republic, which was only released the year after Factory's collapse. However, Technique was not New Order's last release on the label overall— that title goes to "World in Motion", their 1990 single for the World Cup. The individual members of New Order would also continue to release material on Factory between 1989 and 1992 via various side projects, with Bernard Sumner's Electronic, Peter Hook's Revenge, and Stephen Morris & Gillian Gilbert's the Other Two all releasing singles and— in the former two groups' case— albums during this period.

"Do you really know? 'Cause it doesn't trope":