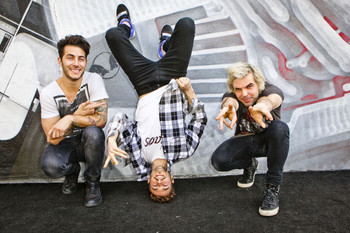 New Politics is an Alternative/Dance/Pop/Punk band from Copenhagen, Denmark, consisting of David Boyd, Søren Hansen, and Louis Vecchio. Formed when Boyd and Hansen both attempted a solo career, they realized they worked better as a group, creating New Politics. They won a contest and played a major Danish festival, despite not being an official band, in this event, they hired Poul Amaliel to play drums.

Soon after, they signed to RCA and chose to move to the United States, staying in Brooklyn. From then on, they performed at SXSW in 2010. Amaliel left the band shortly after to return to Denmark, being replaced with Louis Vecchio.

The bands instrumentation consists of

Their discography with selected singles include

Tropes for New Politics include: