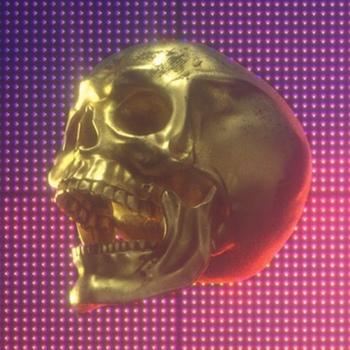 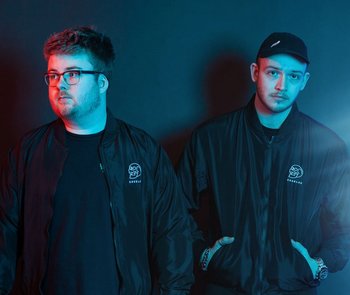 Pretty wasted. note We’ll take their word for it, anyway. Hein Hamers on the left and Vincent Rooijers on the right.
You’re the one ‘til my tan fades away
Get on a train and we’ll be strangers again
— DROELOE, "Sunburn"
Advertisement:

What happens when you combine an electronic music project featuring a distinctive future bass sound with an elaborate mixed media art project? Two Dutch creatives gave the idea a go, and the end result: DROELOE, a unique duo making waves within the EDM scene.

Originally appearing out of the blue in 2015 with their viral track “zZz” on San Holo’s indie record label Bitbird, the duo was later revealed as producer Vincent Rooijers and digital artist Hein Hamers, whose respective positions within the band played to their strengths much like Damon Albarn and Jamie Hewlett in Gorillaz.

The duo’s musical output draws on the genre hallmarks of electronic trap music, but with a heavy emphasis on melodic elements and a diverse sound palette. Also, glockenspiels. Lots of glockenspiels. The duo’s visuals make heavy use of VHS tape filters for a Retraux aesthetic, along with lavishly produced, photorealistic environmental design, a cube of neon lights used for their live shows, and a visual trademark present in almost all of their work: a skull made of solid gold.

The duo made waves with more singles on Bitbird, Lowly Palace and Monstercat before expanding their discography with a trilogy of EPs: A Moment in Time in August 2017, The Choices We Face a year later, and rounding out with A Promise is Made in October 2019.

Rooijers and Hamers announced that the two of them would part ways after five years of making music and art together as DROELOE in October 2020. Rooijers will continue the project on his own for future releases, though not without a proper goodbye in the form of a rerelease of the trilogy as one collective anthology album, titled A Matter of Perspective.

After a two-year hiatus, Rooijers returned with the PILLARS /// EP in early 2022, sporting a new visual identity alongside the classic DROELOE sound on three tracks serving as the start of a new era for the project titled "Unexpected Odyssey."

A MOMENT IN TROPES.