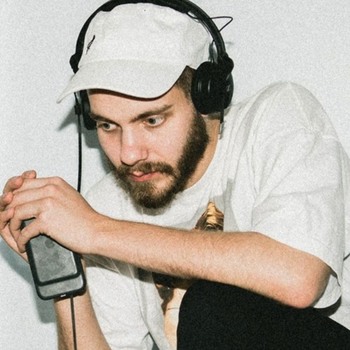 stay vibrant ↑%
Even if it makes me blind
I just want to see the light
— San Holo, "Light" (with Tessa Douwstra on vocals)
Advertisement:

Sander van Dijck, also known as San Holo, is an electronic music producer from the Netherlands. Known well for his distinctive, melody-focused style and sonic diversity weaving through the realms of future bass/trap and indietronica, San is one of the definitive acts of the independent dance music scene of the mid to late 2010s.

Born in 1990 in Zoetermeer and getting his start in the industry as a guitarist and producer for various bands (and as a music teacher), San's earliest solo work was under the ambient alias Casilofi. After debuting under the San Holo name with 2013's Corellia EP, he grew in popularity the next year when his remix of Dr. Dre and Snoop Dogg's "The Next Episode" went viral on YouTube through Trap Nation. Later releases of his like "We Rise," "IMISSU" and the Victory EP would drop through well known labels like OWSLA, Spinnin' and Monstercat, and in 2015 he started his own independent label named Bitbird (now home to like-minded artists like Taska Black, Duskus and DROELOE).

San's biggest solo hit to date, "Light," released on Bitbird in 2017. His first full-length album, album1, came out the next year. San followed up the record with a few additional singles and an EP made during the 2020 lockdown period called stay vibrant, with his sophomore full-length, titled bb u ok?, following in the spring of 2021.

Slow down
You're racing ahead
Drown out the words that they said
Won't you come up for air?
When you surface
I'll be right here