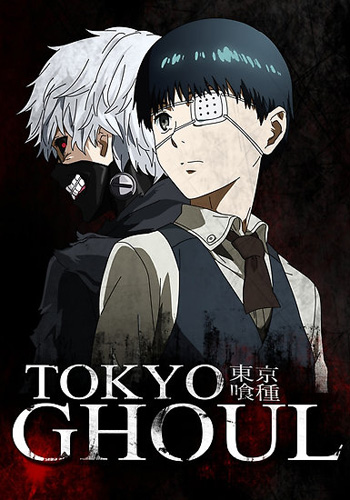 "I am... a Ghoul."
"If, for argument's sake, you were to write a story with me in the lead role, it would certainly be a tragedy."
— Ken Kaneki
Advertisement:

Tokyo Ghoul is a seinen manga series by Sui Ishida that mixes together elements of horror and action, starting off with references to The Metamorphosis, but quickly switching into a tragic story about the circle of violence between humans and ghouls.

Your average bookworm and Ordinary College Student, Ken Kaneki, has fallen for a beautiful woman by the name of Rize Kamishiro. On their first date, said woman reveals herself to be a monster known as a "ghoul", a creature in human form that feeds on human flesh. Having taken the time to trap him, she prepares to eat him when a falling girder smashes her to bits and leaves Kaneki horribly injured. Saved through a transplant of organs from the dead woman, Kaneki is left with the inability to eat normal food and a hunger that just won't go away. It doesn't take long before Kaneki realizes what's happened to him, and the far-reaching implications of being a person who belongs to both the human and the ghoul world.

In this world, ghouls are creatures that can only feed on humans. As a result, the Commission of Counter Ghoul (CCG) was created to combat them. Kaneki, now a one-eyed ghoul (a type known for being extraordinarily powerful), finds shelter in Anteiku, a local coffee shop staffed by friendly ghouls. But soon, he becomes pulled into a war between the CCG and Aogiri Tree, a ghoul supremacist organization led by the One-Eyed Owl, a feared and enigmatic figure.

And now, Kaneki struggles with his humanity more than ever...

The manga was serialized in Weekly Young Jump from September 8, 2011 to September 18, 2014, with a total of 143 chapters in 14 volumes. A sequel, Tokyo Ghoul:re began serialization in October 2014. Taking place two years after the disastrous events in Tokyo, it follows new protagonist Haise Sasaki, Akira Mado, and members of a newly-formed team of Ghoul-Hybrids created by CCG as they continue the fight against Aogiri and the Owl, all while a traitor within the CCG sets his own plan in motion. This sequel manga ended with 179 chapters in June 2018.

The series has been adapted into four 12-episode seasons by Studio Pierrot. The first season, simply titled Tokyo Ghoul, debuted in Summer 2014, and, for the most part, follows the flow of the manga, ending halfway through the Aogiri arc. The second season, Tokyo Ghoul √A, debuted in January 2015, picking up where the first season left off but partly going off into a different direction to the manga, blending in its own story with the rest of the original manga. A third season based on Tokyo Ghoul:re was released on April 3rd, 2018, with a fourth and final season released in October 2018. The anime premiered on Toonami on March 25, 2017.

It has spawned several Spin Offs, across several forms of media.

The Novels provide examples of:

The video game provides examples of: