Fanservice with a Smile 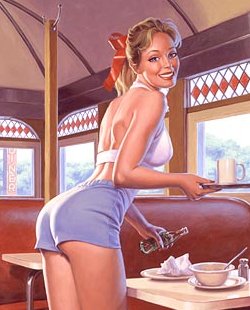 Would you like your coffee with cream and sugar, Sugar?
"Remember, there's only a one letter difference between tits and tips."
— Misfile
Advertisement:

Female serving staff wearing revealing outfits. Can be anything from a maid costume to a short skirt and low-cut top that reveals just enough cleavage to keep the male clientele interested. If the waitresses are wearing hot pants and a tight T-shirt/tank top, this, um, outfit is probably a parody of Hooter's (a fairly common target of parody and of imitation—if the fact that "breastaurant"

is a word is anything to go by).

Less commonly, the serving staff may be male, and dressed to expose or accentuate his physique. He may be shirtless (perhaps with a bowtie), or wearing a Naked Apron, or some other Rule of Sexy.

While not necessarily immoral, this can easily be demeaning or dangerous for employees in plenty of circumstances. Compare Go-Go Enslavement and Bad Job, Worse Uniform.