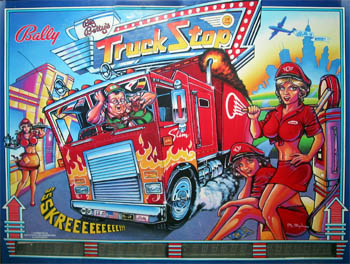 Truck Stop (Full title: Big Betty's Truck Stop) is a Physical Pinball Table designed by Dan Langlois, Steve Kirk, and Jim Patla, with art by Pat McMahon. It was released by Williams Electronics under the "Bally" label in 1988.

The player is cast as a semi truck driver, enjoying some good donuts, hot coffee, and fine company at Big Betty's between shifts hauling cargo. Hit the symmetrical double ramps to spot the various cities, then pull into the Gas Station to lock the ball. Spell C-I-T-Y five times to reach a destination and start two-ball multiball, then blast through the center dropdown targets and hit the bonus multiplier. For a faster trip, hit all of the blue targets to light the diamonds and complete the current destination.

The game actually started as "Diesel Demon", a table designed by Steve Kirk at Bally about a zombie truck driver terrorizing motorists, then rethemed and renamed to the less intimidating "Ramp Warrior". During this time, Bally was bought out by Williams, and company management decided to differentiate the two brands by reserving the Bally label for games with low-brow concepts and big-breasted women. "Ramp Warrior" was the first game to fall under this edict, and thus Truck Stop was born. Many players consider it an empty pleasure, a fun game to be played when taking a break between more epic titles.

Trivia: Due to an engineering mistake during design, the wireforms in the upper part of the playfield were smaller than normal, causing the balls to get stuck in them. The workaround was to replace the standard 1¼" balls with smaller ones, making this one of only two pinball games to use 1" balls.