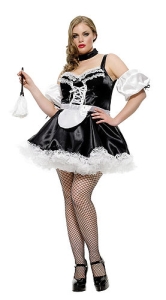 The French Maid Outfit is a form of fetish, a type of Fanservice or both, made (or perhaps maid?) to call to mind the French Maid character type (or, if in Japanese media such as Anime and Manga, the Meido character type). They are a favorite Halloween costume and often appear in sexual roleplaying. High-heeled shoes or boots and fishnet or black, back-seamed stockings are standard parts of this outfit, which may sometimes include fancy leather or lace gloves as well. As the page image shows, the dress always has a short skirt to show off the wearer's legs.

The Meido variant, while still very much a form of fanservice, tends to be more conservatively cut than the Western costume it was based on. The fantasy comes from the subservience and Moe-ness of the wearer rather than more blatant sexuality.

For the characters, rather than the costumes, see French Maid and Meido.

Compare to Mini Dress Of Power and Sexy Santa Dress.