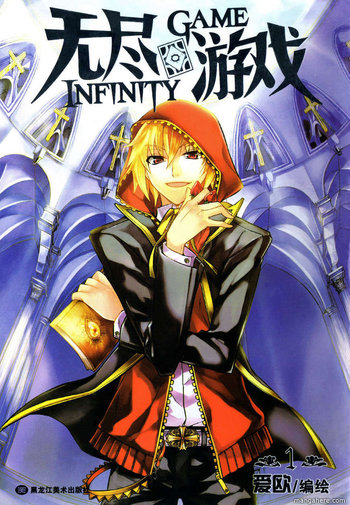 Long Wei, a Brilliant, but Lazy high school student accidentally gets pulled into an out-of-world church in which he is claimed to be "Dungeon Master"/God of another world, where he has supreme control and do whatever he wishes.
Advertisement:

There to help him is an amnesiac girl, Dwarven Defender 00 (D.D.) (previously Trishia), who is the Sole Survivor from the previous DM, who drove all the previous occupants insane and forced them to kill one another - for some reason Trishia was unaffected. After destroying the world he created, he took her emotions and memories away, telling her to wait for the next DM and gave up his title.

Long Wei decides to make a fun game out of this, to escape his boring school life but worlds are difficult to create, so instead he creates a program that creates infinite blocks to save him the trouble. He also discovers that DMs must obey eleven rules; the seventh is the one he has a problem with: DMs are not allowed to enter the alternative world and are only allowed to control it unlimitedly from the church.

Hating this idea, he creates the game and resigns his DM status so he can play inside instead - stating that whoever wins the game gets to become the new DM. Intending to win, Long Wei enters the game after attracting attention from fellow students and erases D.D.'s knowledge of the identity of the DM.

Except a Computer Virus has entered the program after starting internally from the game causing people to start dying. While trying to protect himself from the killer game, Long Wei must also discover who set up the virus.

It was written and drawn by Ai Ou (author of Bloodline) and completed at two volumes - with a completed fan translation.