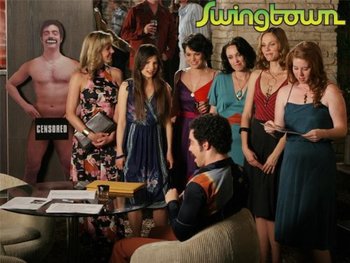 Swingtown takes place in the suburbs of Chicago in 1976, when the Millers leave their old lower middle class neighborhood, and move into a new home in a more affluent, liberal suburb. The parents, Susan and Bruce, befriend next door neighbors, swingers Trina and Tom, who maintain an open marriage and encourage them to follow suit. In the meanwhile, the Millers attempt to hold on to their old friends - Roger and Janet, who lead a far more conservative life style. Meanwhile, teenage daughter Laurie is Hot for Teacher, and naive BJ falls for his Troubled, but Cute next door neighbor Samanatha, to the chagrin of his best friend Rick, who is also Roger and Janet's son.The show is full of nostalgia of The '70s, complete with disco, teased hair, pong, Deep Throat scandals, big sunglasses and roller skates. Mostly, however, it focuses on the cultural transition aspect of the period, and the clash of values between old world conservatism and the height of the sexual revolution.