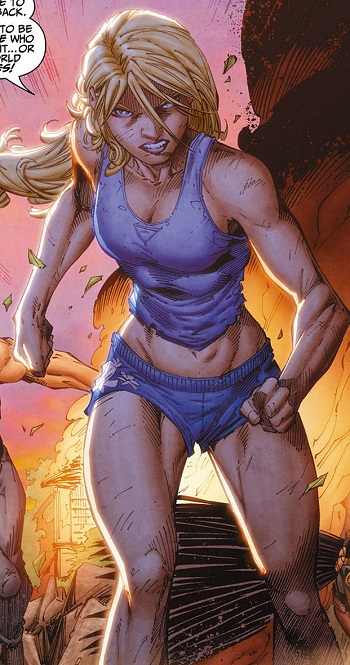 Cool girls don't look at explosions.
"I have a theory: a girl must be wearing a tank top in order to survive in a horror movie."
— Cat Duhaime, "The Final Girl Tank Top Theory"

The Tank Top is a very standard garment for a typical Hollywood Action Hero. Tank tops, especially utilitarian versions, are typically associated with laborious activities — and thus often used to make women seem more "butch", "tough", or "masculine". Even the sexier variations are not exempt from this association.

At least, they did for men. For women, the tank top still remains a reliable tool for both costuming and characterization. It's both practical and can show off impressive amounts of skin, the exact amount depending on exactly how much sex appeal the creators are going for. In drawn mediums such as animation or comic books, what looks like a functional and sporty tank top/sports bra in an action scene can also look like a sexy camisole in a more relaxed one.

This trope has also become common in Western horror movies, for similar reasons as the above. During The '90s, the traditional Final Girl as an avatar of conservative sexual morality became a Discredited Trope thanks to Scream and the resulting boom in self-aware "meta" horror in the latter half of the decade, but the basic concept of the female Sole Survivor didn't die. Instead, the Final Girl adapted with the times, with more focus placed on her being a credible match for whatever bad guys or monsters the film throws her way as opposed to surviving on the strength of her moral virtue. Unsurprisingly, the tank top became popular attire for female survivors in horror movies. It helps that, while a tank top can easily be made sexy, it doesn't scream "sexually active", meaning that the woman in the tank top can still be credible in the more traditional Final Girl role, even if it's not the focus.

A Zig Zagged Sub-Trope of Gendered Outfit and Stripperific, depending on the type of tank top. Common substitutes include a sports bra, a tube top, or (in Japanese media) Sarashi. A common feature of an Adrenaline Makeover, especially when a female character takes off her overshirt to reveal that she's wearing a tank top underneath.

Sub-Trope of Sleeves Are for Wimps. Not to be confused with Shorttank, which despite the name is about a tomboyish deuteragonist in shonen-oriented works, though she often does wear one of these.