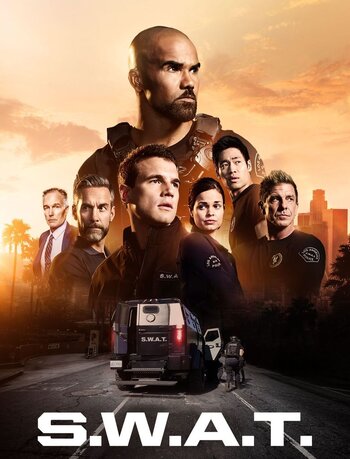 "The incident commander shall request SWAT when at a barricaded or hostage incident when the suspect is probably armed; the suspect is believed to have been involved in a criminal act or is a significant threat to the lives and safety of the public and/or police; the suspect is in a position of advantage, affording cover and concealment or is contained in an open area and the presence or approach of police officers could precipitate an adverse reaction by the suspect and the suspect refuses to submit to arrest."
— Statement seen in the show's opening sequence
Advertisement:

S.W.A.T. is a 2017 Police Procedural drama series and an adaptation of the 1975 series of the name (the second of which, after the cinematic remake from 2003). This version was developed for CBS by Shawn Ryan and Aaron Rahsaan Thomas. It stars Shemar Moore in the lead with Stephanie Sigman, Alex Russell, Lina Esco, Kenny Johnson, Peter Onorati, David Lim, Jay Harrington and Patrick St. Esprit. It aired the first episode on November 2, 2017 in North America.

The show centers on Sergeant Daniel "Hondo" Harrelson, an African-American native Angelino and former Marine who is appointed to be the leader of a SWAT element after a shooting incident involving gunrunners seriously wounded an African-American teenager, which ignites racial tensions throughout the Greater Los Angeles Area. Hondo tries to walk the line between doing his duties as a LAPD SWAT officer while navigating department politics and maintaining ties to the community he grew up in.

The unit also picks up Jim Street, a new recruit assigned from the Long Beach Police Department. Tensions start to show since he's Hot-Blooded who goes into action without thinking about the serious consequences.

S.W.A.T. has aired four seasons, with the fourth season release being delayed until November 2020 due to production complications from COVID-19.

The fifth season is airing as of October 2021.

The show is in a shared universe with The Shield.

Example of:
From Camouflage to Criminal