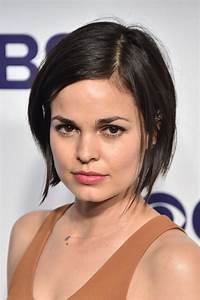 Lina Esco is an American actress of Colombian descent, born in Miami, Florida on May 14, 1985.
Advertisement:

Her breakout role was as Katie Vega on Cane, daughter of the lead character played by Jimmy Smits. Esco wrote, directed and starred in Free the Nipple, a film about feminist activists fighting laws which make going topless a crime for women, but not men.

She played SWAT officer Chris Alonso on S.W.A.T. (2017), who also struggles with being in a male-dominated profession. Her role also explored other issues facing women and LGBT+ people (as Chris is a bisexual woman).

Esco is an activist who has backed the Free the Nipple campaign (as her film above was about), passage of the Equal Rights Amendment, the #Me Too movement (she has stated Harvey Weinstein sexually harassed her) and charitable efforts against dolphin slaughter. She has also been open about twice being raped in the past.