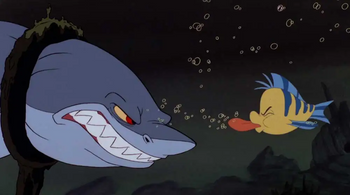 There are lots of ways to insult someone. There's the Stealth Insult. There's sarcasm. There's name-calling.

But if you really want to make sure that your insult is the most basic and childish possible, there's nothing quite like having someone stick out their tongue at someone else.

Many a parent has scolded their child with "Don't stick out your tongue." In fact, many times this is done behind someone's back, especially if it is an authority figure who can punish them, like a parent or teacher.

In anime, this is typically combined with the Eyelid Pull Taunt. It may also accompany the "Silly Me" Gesture. Closely related to Blowing a Raspberry.