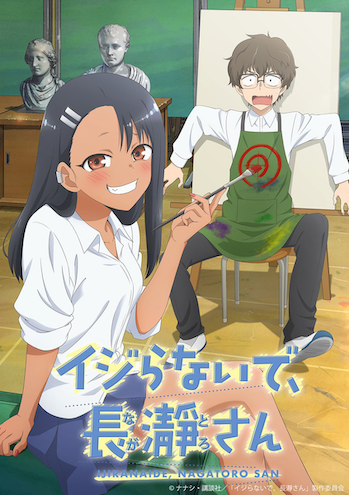 "You're so gross, Senpai!♥"
Nagatoro: I'll give you a reward if the drawing looks good~
Senpai: It's fine, you don't have to...
Nagatoro: If you could ask me to do anything, wouldn't you be more motivated?
Senpai: For you, a present is probably more like a punishment game or something...
Nagatoro: That's because you lack spirit, Senpai.
Advertisement:

Don't Toy with Me, Miss Nagatoro (Ijiranaide, Nagatoro-san, a.k.a. Please Don't Bully Me, Nagatoro-san) is an ecchi romantic comedy manga by 774 (Nanashi).

Energetic high school freshman girl Nagatoro happens upon a timid Senpai who can barely speak to her when she discovers the manga he'd been working on. She takes an interest in him despite his complete lack of social acumen, and she begins teasing, flirting with, and bullying him every chance she gets. Senpai puts up with it and starts to fall in love, and he's probably not the only one.

Originally a series of Pixiv webcomics starting in 2011, Nagatoro-san is 774's first non-pornographic published work, beginning in 2017. Nagatoro is a prime example of what 774 calls "Sadoderes." Like a Tsundere, Sadoderes flip-flop between acting loving towards their love interest, but instead of acting angry or embarrassed, Sadoderes will tease, insult, or otherwise toy with their love interest's emotions.

The series is currently being published by Kodansha as part of their Magazine Pocket line with chapters being released every two weeks. It has been licensed in English by publisher Vertical. An anime adaptation was announced in July 2020, and began airing in April 2021. A second season was announced in October 2021 and will begin airing in January 2023.

Don't Toy with Me, Miss Nagatoro provides examples of: