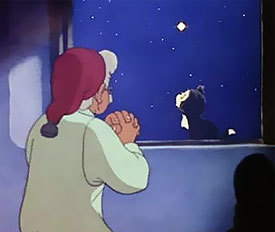 Anyone want to tell him that's actually Jupiter?
"The evening star is shining bright,
So make a wish, and hold on tight,
There's magic in the air tonight,
And anything could happen..."
— The Princess and the Frog
Advertisement:

Characters in stories always want something; it's one of the rules of fiction. Some heroes work very hard in pursuit of their dreams, some use wit and charm, but a few look up to the nearest star and make a longing, desperate wish.

Wishing has power in fiction; it's one of the main sources of Applied Phlebotinum. No matter what you want, from a new car to a sudden age-up, you can get it by wishing. Of course, you have to Be Careful What You Wish For and make sure that if you want to be special, normal, or want someone out of your life, that you actually mean exactly what you say. Good or evil, the wish-granter is almost always a Literal Genie who will gladly warp reality for the heck of it.

The best-known wish-granter is probably the Genie in a Bottle (or other similar magical creatures) who generally grants Three Wishes. If he's lucky, the hero will get a Benevolent Genie; unlucky ones will have a Literal Genie or even a Jackass Genie.

Other wishing methods, generally only resulting in one wish, include:

After the wish has been granted, the wisher may discover they don't like the way things are going and will use another wish to hit a Reset Button. If after all the wishes have been used up, the wisher ends up no better off, they've been Wasteful Wishing. Big wishes may end in a Wishplosion.

The final shot may reveal that the wish story was All Just a Dream (Or Was It a Dream?), but some stories are much more subtle and leave it up to the audience whether the "wishes" really came true or were just a string of marvelous coincidences.

Subtropes include It's a Wonderful Plot, I Wish It Were Real, Wishing Well, and Wishing for More Wishes. Also, see Mundane Wish for the comic version. Often involves a Reality Warp.

Not to be confused with Make-A-Wish Contribution.

Christopher Robin shows Pooh his special wishing star which he makes a wish upon.

Alternative Title(s): Wish Upon A Star

Christopher Robin shows Pooh his special wishing star which he makes a wish upon.