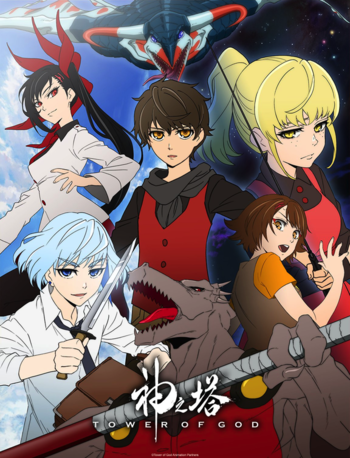 "What do you desire? Honor and pride? Power and influence? Money and riches? Revenge? Or... To transcend all such things? For what do you risk your life to climb the tower? Whatever you desire, you will find it here. Welcome to the Tower of God."
— Opening Monologue
Advertisement:

The boy called Twenty-Fifth Bam is in a strange place. He has just lost his only friend. He is staring at a monster. He is on the lowest Floor of the Tower.

He entered the Tower chasing his best friend, Rachel. But once inside the Tower, everyone must make their own way to the top, and Bam quickly learns that the Tower's inhabitants have a low opinion of "Irregulars" — those who enter the Tower without invitation. Faced with the prospect of a new test on every Floor and many, many, many intrigues and colliding stories and wills in this alien, magical realm, his determination to reunite with Rachel is the only thing keeping him going.

Written and illustrated by Slave.In.Utero, Tower of God (신의 탑) is a Korean Webtoon with almost 500 chapters as of the end of 2020.

Chapter 78 served as the end of the first saga and season, the second begins at Chapter 80 with an epilogue and prologue between the two seasons, and consists of three sagas that last up to Chapter 417. The third season begins with Chapter 418.

It is the first officially published story of the Talse Uzer universe; previous privately uploaded stories by S.I.U. have been infokilled by the author.

The webtoon can be seen here

An anime adaptation produced by TMS Entertainment began airing April 1st, 2020, and can be viewed here

Tower of God contains examples of: