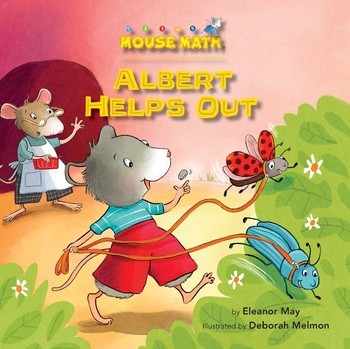 Albert Helps Out, one of the books in the series
Advertisement:

Mouse Math is a series of educational picture books illustrated by Deborah Melmon, and written by various authors, though Eleanor May was the author for the majority of the titles.

The books are focused on a young mouse named Albert and to a lesser degree his older sister Wanda. As the books' intros explain, "Each book in the Mouse Math series provides a fresh take on a basic math concept. The mice discover solutions as they, for instance, use position words while teaching a pet snail to do tricks or count the alarmingly large number for friends they've invited over on a rainy day—and, lo and behold, they are doing math!"

The various titles in the series were published from 2013 to as late as 2017. In 2019, most if not all of the titles in the series were reissued with new cover artwork. Each includes an activities section at the end to help parents and/or educators reinforce the concepts being taught in the story. Beginning in 2022, new books in the series again began being published, with more new releases continuing into at least 2023. The new titles are all authored by Lori Haskins Houran, with Deborah Melmon returning as illustrator.