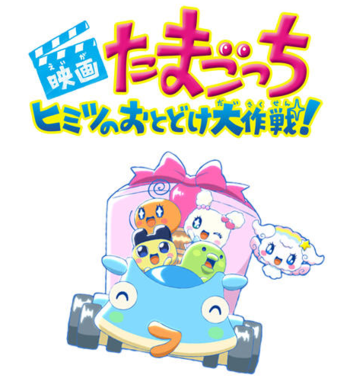 Eiga Tamagotchi: Himitsu no Otodoke Dai Sakusen! (roughly "Tamagotchi the Movie: Big Secret Delivery Operation!" in English) is an anime short film based on the Tamagotchi series of virtual pet toys. It was made to celebrate the 20th anniversary of the Tamagotchi franchise and was screened with the Kamisama Minarai: Himitsu no Cocotama movie, which was released on April 28th, 2017.

Mametchi and his friends Memetchi, Kuchipatchi, Lovelitchi, and Nijifuwatchi are assigned to deliver a special package to the Gotchi King. Things go fine until an unusual vehicle suddenly appears and tries to steal the package from them.