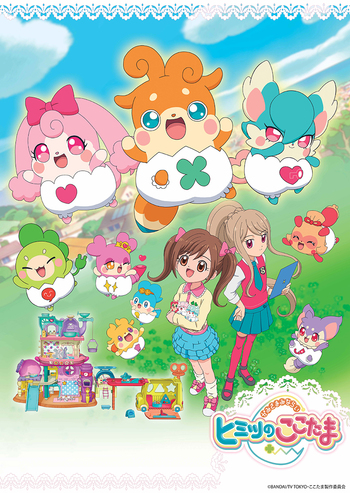 Kamisama Minarai: Himitsu no Cocotama ("Cocotama: Secret Apprentice Gods") is an anime series produced by OLM Incorporated, based on Bandai Namco Entertainment's line of dollhouse toys marketed to girls. It premiered on October 1, 2015, replacing Tamagotchi during the Fall 2015 Anime season. The series has also been streaming in Nico Nico Douga, but it's region-locked outside of Japan.

The anime follows fifth grader Kokoro Yotsuba, who is a rather Cute Clumsy Girl but has a tendency to take good care of her belongings. One of the things she treasures the most is a colored pencil set, which her grandmother gave her during her kindergarten years and told her that everything has souls, including items. Grandma's words are proven to be literally true one day, as while Kokoro is at school, her colored pencil set at home starts glowing and an egg pops out, revealing itself to be a tiny but powerful furry creature known as a Cocotama. This Cocotama, named Luckytama, has fun by running around the desk until...

...Kokoro gets home from school, and is somewhat surprised and shocked to see him! It gets worse from here as he is doomed to disappear unless she signs a Cocotama Contract in order for him to exist. Despite him having the worst magic ever, she decides to do it, but is faced with rules, including not revealing their existence or talking about them to others. After that, she encounters other Cocotamas that befriend her or cause her trouble as well as dilemmas of her trying to keep them a secret and keeping a very low profile.

First revealed at the 2015 Tokyo Toy Fair, the anime and toy franchise is a cute and adorable take on the Pals with Jesus trope and on usual Shojo anime, with stealth elements of Shinto Animism mixed in. Let's say it's a cute, unusual mix.

On April 28th, 2017, a Cocotama movie was released in Japan alongside a Tamagotchi short film, Eiga Tamagotchi: Himitsu no Otodoke Dai Sakusen! ("Tamagotchi the Movie: Big Operation Secret Delivery"). The movie and the short film were first announced around the 1st anniversary of Cocotama and the 20th anniversary of Tamagotchi, respectively.

The series lasted 139 episodes followed by eight three-minute shorts that served to set up a Sequel Series titled Kira Kira Happy Hirake Cocotama, which premiered in September 6, 2018 and featured a completely changed cast of characters (they got rid of almost the entire previous cast, with Luckytama and co. shoved Out of Focus as they've so far only appeared in the Hirake! storyline in a poster

and their series finale).