Bow and Sword in Accord 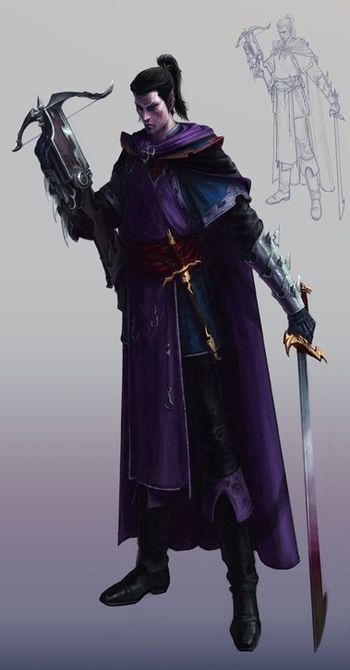 A bolt to the face or a blade to the gut. Either way works.
Advertisement:

A character who wields both a bow and sword (this includes crossbows). This is quite common in fiction for a number of reasons:

Besides these more down-to-earth or aesthetic reasons, using a bow and sword competently takes a lot of training and time; it can symbolise dedication, co-ordination, flexibility of character and perhaps even a certain kind of intelligence. It's certainly the mark of a wary, well prepared character; if you're this well prepared you're either naturally thorough in preparing for circumstances or have been taught the value of said preparations by experience. Characters like this are often royalty or nobility in reduced circumstances; the combination of a bow, a relatively humble weapon, beside a sword or other heraldric arm, a sign of high birth. It might also be a character from a humble background who has come into a more heroic, important role in life.

It can also signify that this character, for all his noble bloodlines, is an amoral person. Be wary of sword and crossbow combinations in particular.

Characters armed this way tend to be rather lightly armoured. This may of course be due to the fact that most archers are lightly armored. (When was the last time you saw or read about a hero in full plate using a bow?) For some reason, the archer element seems to dominate. They tend to either be extremely agile or wily and cunning in order to make up for it. This does make some sense, given that the more weapons you carry, the less weight you can devote to armor.

Of course, it's rather difficult to wield both a bow and a sword at the same time (though some characters with crossbows small enough to be fired one-handed manage) unless you've got more than two hands. The favoured technique for this style is typically to shoot foes with arrows from a distance, and then draw the sword once they get too close for comfort.

A mutation of "pen and sword, in accord" (the samurai ideal) of course.

This trope is not for gun-and-sword combinations. For Dual Wielding a sword and a gun (or similar firearms), see The Musketeer (wielding a melee weapon and a firearm, but not at the same time) and Sword and Gun (wielding a blade and a firearm simultaneously).

Subtrope of Choice of Two Weapons.

It's worth noting that this trope used to be called The Ranger, from The Lord of the Rings rangers. Any references to rangers on this page are likely from when the trope was in YKTTW.