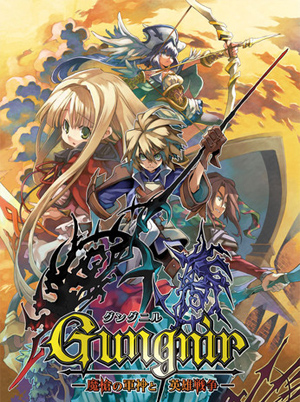 If you reached this page looking for the mythological weapon, try Norse Mythology or Public Domain Artifact.

The newest work by Sting Entertainment and published by Atlus, a Strategy RPG-ish game for the Playstation Portable. It was announced at the end of February 2011, and then released in Japan that May, almost a full year after Blaze Union. It is Episode IX of Dept. Heaven. Gungnir was released in the summer of 2012 in North America, making it the first DHE game to escape No Export for You since the PSP remake of Knights in the Nightmare.

The game's full title is Gungnir: Inferno of the Demon Lance and the War of Heroes, and the story dawns in the year 983, on an empire torn by conflicts between its two races, the noble Daltania and the "accursed" Leonica, who are badly oppressed by the nobility. The Leonica and a few sympathetic Daltania have formed a resistance known as Esperanza, but they're struggling to hold their own against the Imperial Army's greater force and skill.

One day, fifteen-year-old Giulio Raguel—a low-ranking captain in Esperanza—and his men come upon a slave trader and "liberate" his captive, a beautiful girl named Alissa who (unbeknown to them) happens to be Daltanian. Giulio invites Alissa to join his cause with open arms, and although she has her worries, she accepts.

Not long after this, in a battle so desperate that it looks like Giulio will be killed, he discovers the eponymous demonic lance Gungnir and takes it up, managing to turn the situation around. The resistance rejoices, but this marks the creaking of Destiny's cogwheels into motion. And remember: This is a Sting game. Destiny is a total douche.

The game handles similarly to your garden-variety isometric SRPG such as Tactics Ogre or Final Fantasy Tactics, but is entirely linear in grand Sting tradition and includes a system that allows the player to completely ignore the established turn order for strategic purposes. This makes for a system where Weak, but Skilled units stay just as useful as powerful ones in the hands of a wily enough tactician.

For more about the game's development, see this interview with the creators

Finally, as with many other games in the series, Atlus USA changed a number of characters' names in their localization. Since both sets of names are used throughout the wiki, you may want to consult the character sheet to see what everyone is called in both versions.