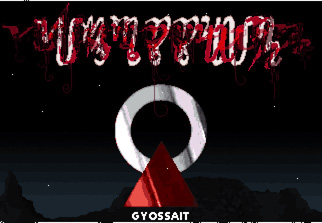 "I shall wear your pain like the finest shawl, and dance before you in it."
— Gyossait
Advertisement:

A long time ago, a god named Oyeatia created mankind as a masterpiece gift for the Goddess of Earth, Gyossait. Sadly, the goddess saw the new species' neglect of her planet as an offense to her, and killed millions in a devastating cataclysm. Oyeatia, in turn driven into a rage by her behavior, attacks his beloved, tears her apart, and buries her essence deep within the core of the planet, trapping it inside a prison that no god can ever reach - not even him.

This turns out to not have been the best of ideas, as Oyeatia is eventually overcome with regret and loneliness after having slaughtered his beloved. He wishes to be together with her once more, but how, when no god can ever reach her underground prison? Simple: by surrendering his own immortality and seeking her out as a simple mortal.

But Oyeatia's quest will not be easy. On the way to Gyossait, he must travel through a post-apocalyptic, crumbling world, tortured and tormented by what remains of Gyossait. Not only must he battle his way through hordes of humans maddened and mutated in the wake of Gyossait's cataclysm, but it would be foolish to assume the goddess herself would not harbor some resentment towards him after their little clash. And a new god, Uzaza, has taken center stage in the world, and is more than a little pissed at Oyeatia...

is a horror platformer created by Amon 26 on Newgrounds using the Stencyl game-creation software. It's notable for managing to take retro-styled bitty graphics and creating amazing Scenery Gorn with them, and by massive amounts of Mind Screw present in it. It's pretty eerie and has a few Jump Scares in it, therefore it might not be suitable for the faint-hearted.

is now up for sale that includes this game, All of Our Friends Are Dead, Au Sable, The Hunt (the prequel to Au Sable), and an alpha of "Uzaza," which would have been the prequel to Gyossait. It also contains the game's soundtrack, snippets from the game's production, and artwork.