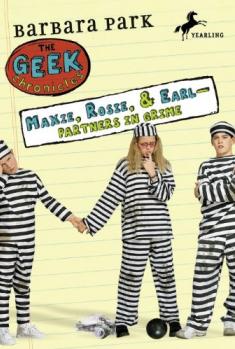 Written by Barbara Park, better known nowadays as the author of Junie B. Jones.

Maxie, Rosie and Earl are each the least popular kids in their respective classes. Maxie is the smartest kid in his fifth grade and is bullied for getting perfect grades. Earl is the opposite, awkward and clumsy, and is laughed at by his fifth grade class, which is in a different room. And Rosie is simply avoided by the other kids in her fourth grade class, for being a supreme tattletale.

One day, each of the three kids is sent to the principal's office for something they each did, something each of them didn't see as being "wrong". Through some luck, they discover that it's possible for them to ditch school and not get caught. Or is it? After hiding in the dumpster during a fire drill (Maxie's idea), then sneaking out of school once it's over, the kids then find they have another problem: they might have been seen! They try to work out what to do about this problem, and through doing so, grow to tolerate and like each other and become friends in the end.

Essentially a Slice of Life story with barely any actual plot to speak of, this book thrives on its humor and character interactions. Maxie, Rosie and Earl half argue, and half get along, their quirks making for some very fun interactions. And then there's the way they deal with other kids, like a kindergartner who may have seen them skip school...

Spawned a few spinoffs, resulting in The Geek Chronicles, none of which are as popular as the original. Originally was a standalone book.