Video Game / All of Our Friends Are Dead 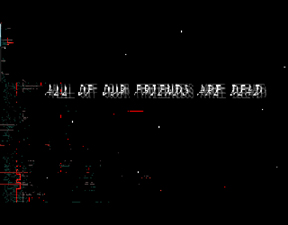 "Listen at us, won't you?
Share with us your head
Do hide behind the iris
As all of our friends are dead."
Advertisement:

All of Our Friends Are Dead is a 2009 freeware game by Amon 26. A frightening, disturbing, trippy, and fun run-and-gun platform shooter that can perhaps best be described as Contra on a Benadryl trip; a work of art replete with some of the strangest and most unsettling images you're ever likely to see in a game. The industrial rock/noise soundtrack and bizarre first-person plural writing only contribute to the highly surreal and nightmare-like atmosphere of the game. Since the story itself makes absolutely no sense whatsoever, it is therefore left to fan interpretation and speculation. The game can be downloaded here