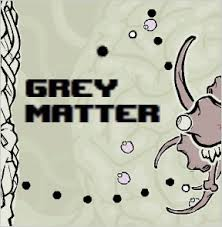 It's grey indeed.
Reality is the #1 cause of insanity among those who are in contact with it.
Advertisement:

The first video game from Team Meat (Edmund McMillen and Tommy Refenes) of Super Meat Boy fame, Grey Matter is a 2008 Adobe Flash game billed as an "anti-shooter", due to its inversion of Collision Damage - the enemies do the shooting, and it's your job to ram into them. The theme and general aesthetic of the game is mental illness- you play as a little black dot, representing medicine, and must destroy monsters representing mental illness- but that's really just there to compliment the craziness of the gameplay.

The original can be found here

. A slightly updated version was also released as part of McMillen's Basement Collection.