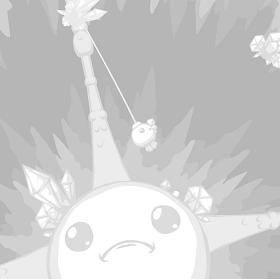 Venture into space! Exploring distant planets and solving their puzzles to change the way the world views you, become a hero!

So says the description of Aether. Aether is a video game designed by Edmund McMillen and Tyler Glaiel and published by website Armor Games. Released on September 3, 2008, it can be played for free online or downloaded for offline play. Players control a Heroic Mime boy and an octopus-squid-alien-Eldritch Abomination-thingy that the boy encounters on his travels, solving puzzles and the friendly (and not-so-friendly) inhabitants of different planets to restore them from monochrome to color. The two travel through space by swinging on clouds and asteroids with the monster's huge tongue.

As of August 31, 2012, a remastered edition has been released in The Basement Collection, along with a few of Edmund's other old games.