Video Game / And Everything Started To Fall 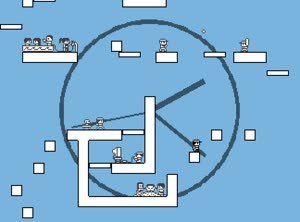 And Everything Started to Fall is a brief Platform Game created by Alexitron on Adobe Flash in 2009. It can either be played online here

It functions as a vertical platformer in which you play as a boy, who grows up, and as he does, the platforms start falling. Since it can be finished in a few minutes, to say any more would be a spoiler, and it recommended you try the game before reading this page any further.