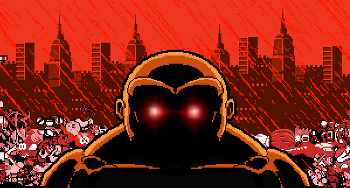 "Imagine you could put every NES game ever made into a blender and that's basically what you're dealing with here in the form of a huge Flash game."
— The developers
Advertisement:

Abobo's Big Adventure is a free to play Adobe Flash-based browser game made by "Team Bobo" and released to the public on January 11, 2012 after an extremely long development cycle. The game's development started in 2002 as a pet project of Roger Barr a.k.a. -RoG- of I-Mockery fame, who wanted to create the ultimate tribute to NES games. The early drafts of this project were scrapped because of other commitments, and -RoG- started anew in 2006 with a new group of developers, who strived to preserve as much as possible the look and feel of NES titles.

The game stars Abobo, the notorious Giant Mook of Double Dragon, in a quest to save his son Aboboy who has been kidnapped by a bunch of goons. He starts in the familiar streets of the game he came from, but eventually finds himself stuck in several classic NES titles such as Super Mario Bros., The Legend of Zelda, Balloon Fight, Contra, Mega Man and many more, smashing and killing everything in sight to find and destroy his son's kidnappers.

Abobo's Big Adventure quickly became popular on Newgrounds, being voted as Daily Feature and Weekly Users' Choice in a matter of days. If you want to experience it yourself, here's the official site