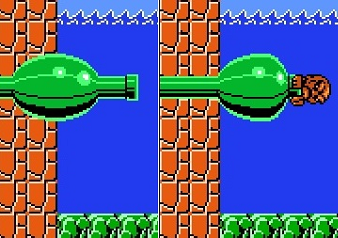 Mostly found in animated and CG media, the Traveling Pipe Bulge is a phenomenon that occurs when an object moves through a pipe or hard tube, creating a bulge to tell you where it is. Bonus points if the fittings do not contract after the object passes through them.

It's not always a pipe, it can be a water hose as well.