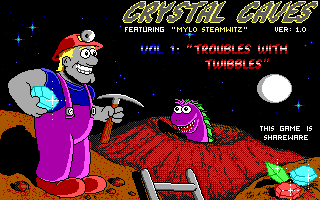 One day, I'll be rich enough to afford the cure for my decolorizing skin condition!
A 1991 side-scrolling Platform Game (or rather, a series thereof) by Apogee Software (now 3D Realms), Crystal Caves features the unlucky space trader Mylo Steamwitz as he searches mines of the Altairian system for crystals so that he can invest into several get-rich-quick schemes. On his way, of course, he runs into countless monsters, hazards, locked doors, power-ups and other standard platforming fare. The goal on each level is to collect all the crystals and get to the exit.
Advertisement:

The game was actually released as three separate episodes, each one featuring new levels and some minor changes in graphics. The first one was made available for free as a teaser, while the next two were available for purchase. The game is still sold on the 3D Realms website. It uses the same engine as Secret Agent.

In September 2020, Apogee announced Crystal Caves HD, a full remake of the original game with updated graphics, a level editor, a brand new fourth episode, and various other new features and bug fixes, for Steam and GOG.com.

Not to be confused with Crystal Castles.